Honey, You Want to do WHAT? 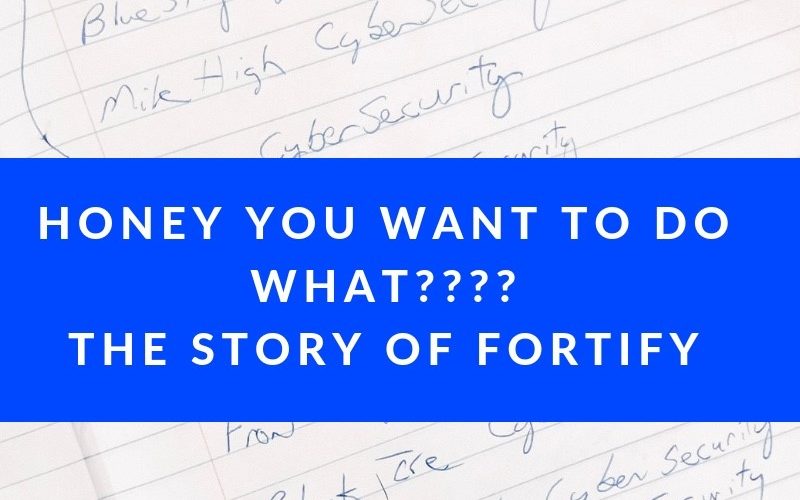 In early 2018, while Eric Jones was pondering a job change, he began to think about the possibility of building his own company, a seemingly out of reach pipe-dream that he’d often pondered. He started brain-storming different service offerings and how he could effectively monetize his deep understanding of IT and cybersecurity. All the while, he was interviewing with various companies and would eventually take what would be his last corporate job. Eric even started attending a networking group for entrepreneurs and small business owners. This networking group provided great insight, help with business planning, and accountability in their twice monthly meetings. This fueled his inspiration even more and made starting his own business feel a little more like reality.

As things would have it, Eric’s corporate job was consuming all of his time, bringing the idea, that was soon to be Fortify, to a slow crawl. In the fall of 2018, an opportunity presented itself…. Eric sold an investment property and now had a little added security that would allow him to further realize that starting a company was starting to become a viable option. Towards the end of 2018, he unexpectedly parted ways with his employer and now he thought, “the stars are starting to align.” With his disciplined Air Force background, 15 years of IT experience, and a deepened knowledge of cybersecurity, he was ready to make his dream a reality!

That is, until he brought up the idea to his wife, Erika. She was reluctant and paralyzed with fear of the unknown that starting a business brings. She had been taught the old midwestern mentality of a career, pick something, get good at it and work hard till you retire. Why would we ever leave the stability and comfort of the corporate world for the unknown? But Eric’s vision was too powerful, and his passion became contagious. As he began to brainstorm, plan, and turn an idea into an actual beginning of a company, Erika began to come around and was soon on board 100%. Her excitement began to build as the plan started to take shape. Soon she was fully engaged and became an integral piece of the planning, even charging ahead with keeping Eric on track while trying to figure out a company name (who knew it was so hard!). She realized that with her extensive background in IT operations and customer support, combined with Eric’s extensive technical background, they had a recipe for success.

Fortify IT Services is the realization of a vision to bring enterprise level experience in IT and cybersecurity to small and medium sized businesses, packaged with a personal and flexible approach. Fortify has taken off faster than Eric could have imagined and we are looking forward to the future invigorated with a passion for our clients and their success! Interested in more, let us serve your SMB with our offerings, connect with us here: